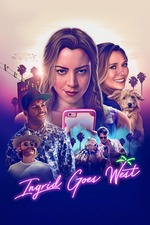 This movie definitely had something to say and left an impression, which is why I gave it four stars. I admit, I was hesitant to click the heart when rating this. For the most part this is a well made, wonderfully acted, very colorful, and captivating movie. It shines in the way most perfect Instagrams do. Which I assume was their goal.

Throughout the entire last third of the movie I just wanted someone to help Ingrid. I wanted her to find proper aid for her mental illnesses. It's a serious condition that seemed highlighted for comedy rather than realistically. It was disheartening to see it so many small actions and moments that were red flags looked over by those 'closest' to her. A part of me really hated that part. How they wrapped up the story felt very hollow. (Spoilers maybe?) There were so many small hints that maybe she would get what she needed but instead it felt like they gave her what she wanted.

All around this was a very original and well done movie, just maybe not the best for mental illness representation.