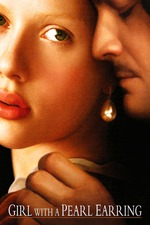 Girl with a Pearl Earring

Having seen the interesting Tim's Vermeer, which studies the methods the painter used to create (or in Tim's case recreate) his paintings, you can't help but chuckle at the methods shown. But that's missing the point of the film, which is more interested in the connection between people and art, which can be used to relate across social boundaries and to us as modern viewers. This applies in all forms but particularly in the styling of the film with colour schemes matching the dutch master and the expressiveness of the minimalist dialogue given by Scarlett Johansson and Colin Firth as subject and painter.
The pacing of the film is typically slow which may alienate some viewers.

Seasons mirroring human temperament along with the boldness of colour and chiaroscuro light no doubt reference dutch masters techniques, and could make for an intriguing underlay of interpretation, however my knowledge beyond that mentioned (especially on Vermeer as the painter of light) is limited, I'm sure someone more familiar with Vermeer and art history could elucidate more meaningful analysis. Thankfully this technique isn't overbearing and the film subtly weaves colour and light (and the time/seasons influencing them) in a 'hiding in plain sight' approach.

The acting is strong especially in regards to the minimalism required for silent expression of thoughts and emotion, Scar Jo punches well above her weight. Colin Firth is a blank as ever (not a fan of his) but Mr. British is fine here as Vermeer. Esse Davis plays jealous well, especially matching the tone set but infrequently the role veers close to Black Adder territory. Cillian Murphy looks like a ridiculous peasant and does fine with limited screen time.

The film does have pacing difficulties often associated with minimalist dialogue and does suffer from the broad modern/outsider perspective of simple artistic and visual spectacle (the inside of houses and furniture lacking the allure required to carry slower scenes, as well as the modern perception of drabness with respect to browns and whites). The pace also highlights the lack of narrative as the relatively simple story seems almost stretched to fit, without adding meaning not already shown.

Sufficiently structured and for a digestible hour and half, the film flourishes in the rustic brown glow of the mild historical-fantasy of trapped individuals connecting through art.