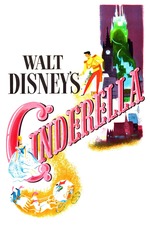 Rewatching with my daughter this has an incredible amount of sexism everywhere, but also a lot charm with the mice and a lot of heart with the contrast of cruelty to sympathy we see from the stepmother and fairy godmother. It almost is an incredibly interesting story because the prince is completely perfunctory and an unimportant presence in the film (in terms of audience projection, he’s a literal blank slate!) and by overcoming adversity in many ways Cinderella is winning the prince as a prize even though objectively in the story she’s mostly a passive prize to be awarded to the prince.

For all that the mice add charm they take away agency, the Cinderella of the first act is actively in command of the household (creatures and people), but the Cinderella of the rest of the film is buffeted by the machinations of the stepmother and the male mice and totally lacking in agency. But is that bad or is that the key element that a lot of children empathize with (being put in situations where you have no choice and no agency)?

The Ballad of Buster Scruggs