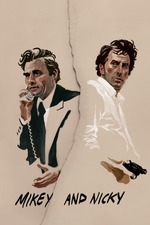 Nicky is holed up anonymously in a shitty motel. Paranoid and panicked, he calls in Mikey, his best friend from growing up, but a bit estranged. Nicky is a loose cannon, and he's gone off one too many times and his time is running out, there' s a contract out on him. Mikey wants to get him out of town, but Nicky just wants to dig in his fingernails into the ratty street life he knows and hang on for all he's worth.

The spend the night in diners and dive bars, at Nicky's mother's grave and at his mistress' place and have a colossal fight before 'breaking up'. It all gets very greek, ending--as it must--in tragedy.

They're two fairly reprehensible, unlikeable characters. Nicky, in particular, is tailor made for me personally to dislike him constantly and almost instantly. But the script and performance and direction are so good that even as you hate him, you understand the charisma he holds in this world and the minor powers he wields and the like-ability that others find in him (even as all of them are viciously and constantly subjected to direct abuse by him).

In some ways, the film is almost therapeutic in it's meticulous study of the cycles of abuse and misogyny and toxic masculinity that produce creatures like Mikey and Nicky, and in other respects it's almost so good at representing them that it almost becomes on their side.

But depiction is not endorsement, and tragedy is not heroism. This is the grim and grotesque and brutally real side of the hardscrabble nature of poverty and the gangsterism that goes with it.