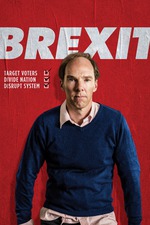 We send the EU £350 million a week, lets send that to this movie to get some better fucking lighting.

Like Brexit itself, this film is quite divisive. If you look on the trailer on Channel 4's Youtube page, it's just people screaming about "BIAS", but they never really say to which side.

Suprisingly, this film is pretty neutral in terms of bias.
While it is about the Leave campaign, the movie itself never really supports it, it doesn't definitively support the Remain either.
It shows the iginuity of the Leave campaigns ability to gain traction and support by breaking tradition (and, also some laws), but it ultimately worked, and this movie shows that actually the way they went about it was pretty intelligent.

But then it also gets into the way it spiralled, how it just caused hate and chaos and fear and lies, and how they fanned those flames and didn't take the responsibility for doing so.

It's constantly going on about the idea of control and giving the idea that voting Leave brings more control  to them and the country, and how the government aren't really that great at controlling the flames they stir up. But then it gets to a point where nobody has control and it's all a shit storm.

The movie just ends by basically saying no matter what side you're on, right now we're fucked. They got what they wanted, but they haven't changed anything, just made chaos and now everybody is fucked.

Which is quite depressing, the movie is a bit depressing, because it's real. It's obviously quite fictionalised, which kinda helps make it not fucking miserable all the time. Benedict Cumberbatch is constantly writing on walls and occasionally going into "we live in a society" rants. Nigel Farrages existence is played off like a dumb comical Disney villain, the occasional stylisation works quite well.

Benedict Cumberbatch is pretty good. As I said, he has slightly goofy elements to his character, but he's also got a lot of depth and characterisation. It's like a mix of Jesse Eisenberg's cocky blunt asshole portrayal of the Zucc in The Social Network and the lead guy from Thank You for Smoking, where he's a character whos views I strongly disagree with, but I can still see the intelligence in their manipulation and understand a bit better

I like the cinematography. There's a lot of really well framed shots, but the shots are lit like shit and are really flat looking, which I guess is the point, but you can still make it visually intresting and keep the realistic style. It just looks really cheap.

The music was real mixed. The score is effective and pretty decent  but the soundtrack overall sucks. It's just classical songs in the public domain that have been overused in media and don't really fit.

The script feels ok. Sometimes dialogues a bit cheesy, sometimes it works great. Sometimes it has threads that aren't built out enough and other times it hammers in the idea of taking control and control as a concept.
However, the focus group scene is fantastic and sad and too accurate.

Also, the constant channel 4 ad breaks got annoying and messed the pacing up for me a bit. The film itself is pretty well paced but the constant pauses and ad breaks was quite annoying. Obviously not something that they can control, but still annoying.

I mean overall it's a solid movie. It didn't really just shout at the other side for being wrong. It takes a step back and looks at both sides and where they succeeded and where they failed.

This is the best and most depressing disaster movie ever made.