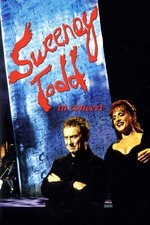 The first time I tried to watch the film version of Sweeney Todd, I legitimately fell asleep. Which is bizarre because I almost never fall asleep during a film, even if it is brutally boring. But something about it was just extra boring to me. The same I could say about this Concert version as well.

The music and instrumentation is great, but some of the performances are mixed and I just have never found the central plot to be very engaging. It just feels very by the numbers and boring and it can't get me out of the funk I feel whenever I experience a Sweeney Todd property.

For the most part however, the sound was perfect, with the instrumentation and the singing. But the central plot and some pretty terrible camera shots stopped me from being able to enjoy this one.

The Man Who Killed Don Quixote