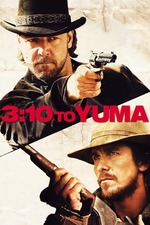 What a Beast of a Western! This was directed exceptionally well by James Mangold with a narrowly focused story that's elevated with phenomenal performances by all the leading cast involved from the likes of Russell Crowe, Christian Bale and Ben Foster.

This film did take it's time to kick some scenes into gear; so yeah, I found it to have it's slower moments here and there but nothing too hard hitting that it ripped me even a little bit out of the experience; I was always interested in what was going on, even during these slower parts.

As watching this film; I could certainly see where some of the inspiration with Mangold's film this year "Logan" came from; not all of it at all but just in regards to the haunting and brutal tone, it set that up well and it all came from this very well done film.

Finally, you could even make a fair argument that Foster managed to out act both Crowe & Bale in this film - the three of them were fantastic but Foster was on fire, one of the best performances I've seen from him, not sure if it's the best but damn, he's good, as well as the rest.

As I say with all my reviews for films; if you haven't seen this film, do yourself the favour as soon as possible and check it out - it's a brilliantly gritty Western that I enjoyed from start to finish - Really damn good stuff.