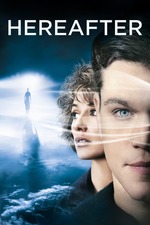 Despite two of my all time favourite films being about the afterlife I am very much a non-believer and normally I hate its inclusion in movies because it is traditionally handled in such a cloying and tacky manner. Sadly this is exactly what we get here with yet another poor film directed by Clint Eastwood. I have to go back to 1992 for his last great directorial effort yet for some bizarre reason he is enjoying his most successful period as a director in the past ten years and, with the odd exception, they've all been pretty poor films. Hereafter is certainly up there with the worst of them which is a shame as it starts very well with a recreation of the South Asian tsunami of 2004 that nicely captures the spectacle and human cost of the tragedy. Sadly that is the one and only positive I can bestow on a film that is slow, pointlessly meandering and badly executed.

It follows three separate stories that eventually converge in the final third in a horribly contrived and vomit inducing way that even if you had stomached the preceding two hours you'd probably still end up hating the film. Unfortunately these three stories are so boring and underdeveloped that they need each other to sustain any respectable runtime yet neither story strand can hold your attention and it lacks the profundity it so clearly strives for or believes it has. Matt Damon isn't bad in the role of a genuine psychic (urgh) and he has good chemistry with an underused Bryce Dallas Howard (a good actress with a quite horrific track record of picking films) but the Paris and London stories are far less lucky. The Paris story is entirely redundant and clearly most of the actor budget has gone on Damon and the famous American cast because what we are left with are ex-soap stars and one of the worst child actors imaginable. The film takes a long time to say nothing at all about grief, loss, life or death. It uses the connection with the Hereafter in a superficial and manipulative way and the whole thing just left a horrible taste in my mouth.