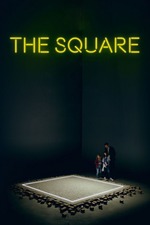 A commentary that is such a sledgehammer to the bourgeois whilst not being the central point by any means - The Square is a masterpiece in conceiving all that is right and wrong in today's social and cultural climate, as well as our fundamental problem with art today - how do we categorise / learn to (un)categorise art.

It is a poignant reminder that, on the subject of defining contemporary art, we are heading towards the idea that we can even conceive 'nothingness' with the film pre-supposing throughout it's entire back-bone that 'the nothing' is everything and that people only care about superficial values and not the bigger picture. The film presents it's world of inhabitants like any other people; completely normal and functioning yet driven to such irrational (and largely selfish) directions - highlighting many ways of contemporary 'being'.

One thing the film doesn't do so well in conveying is a sense of consequence for one's actions - no one in the film actually has anything bad happen to them, besides our central character - who doesn't really learn from his mistakes either, so the depiction of those consequences is relatively contrived in the first place.

This review wasn't meant to be particularly entertaining, fact-ridden or specific - in fact it's rather elusive, I guess it's for the best. Go and watch The Square; utterly unmissable, one of the best films of 2017 in my opinion and certainly the most worthy Palme D'Or Winner - expecting great things from one of the kings of nordic, strangely dystopian but painfully relatable, comedy - it almost kills.