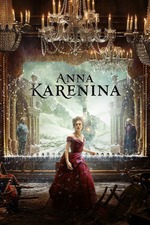 The umpeenth version of the classic Russian story of a woman who gives up her family, position and life for love is beautifully directed in artfully staged sets by Joe Wright, but lacks any form of emotional heart.

Keira Knightley doesn't have the acting chops for this kind of role, and simply comes across as a simpering silly girl who falls for the empty cypher that is Aaron Taylor-Johnson's Vronsky. We don't believe for a second that he is the dashing soldier who can sweep her off her feet.

Jude Law is better as the put-upon husband, and in fact he's growing in range as the years go by. Matthew MacFadyen and his moustache play the comic foil, and the subplots are short-changed.

This may initially feel like something new and fresh but the gimmick soon fades. There are many better Annas out there, and this simply lumbers along in a way which starts to be annoying, meaning that the final tragedy is not simply anticipated, but actually relished when it happens.