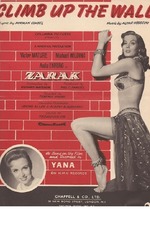 Climb Up The Wall

You'll get a glimpse of the London of the time, with its Christmas lights and shop windows, buses and pretty girls.

You'll see Peter Sellers do a bit about American military types (taken from another film, surely?, maybe the Z-Men as we also have the chair routine from Michael Bentine which is much funnier speeded up).

You'll even see a clip of Elvis in the Army.

Hardly essential, but if you like this sort of thing, you'll be entertained.