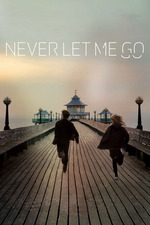 This thoughtful, profound, touching, intelligent and bleak film is an adaptation from the novel by Kazuo Ishiguro.

We first meet Cathy, Tommy and Ruth in their schooldays, where they seem like normal children who fight, bully, and develop tentative friendships. The young actress who plays Cathy, Isobel Meikle-Small, is the image of the actress who plays the grown Cathy, Carey Mulligan, and her acting is very good indeed, a powerful piece of quiet observance. Mulligan herself is superb - she has really become one of our best actresses, without ever seeming to actually 'act'.

Tommy grows to be Andrew Garfield, while Ruth becomes Keira Knightley. Garfield has a certain delicacy and frailty which fits his role well, but I found Knightley stiff and unconvincing - even as the film approaches its last third she still looks great despite the character being supposedly close to her destiny ...

I don't want to give away too much of the plot. I found it echoing Children of the Damned in places, and Blade Runner in others, but with more soft strings and a sense of the human spirit. The ethical implications of the plot are not dwelled upon - although in a world with an ageing population there is much food for thought - instead, we see that these three young people are just that, three young people who are starting to find their way in the world, finding love, developing their characters.

But ah, this film is sad, and dark, and miserable. It isn't one to watch when you are feeling in the need for a cheer-up, but it is one to look at if you want to think and be challenged. You know what? There can be proper cinema, with conscience and heart, proper scripts and characterisation, and logical progressions.

'Never Let Me Go' is a prime example of the 'thinking person's movie'. It isn't quite as successful as the book - which is quietly devastating, even more so because you are not seeing the images but instead creating them in your mind. There are questions here about life, death, genetics, eugenics, and who owns what, who, and why.