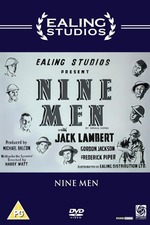 At just over an hour, this flag-waver from Ealing Studios set up a sandstorm in the wilds of Glamorgan to stand in for the desert, and presented a field of battle and trapped soldiers besieged by the Italians.

This being made in wartime there are broad characterisations of the cowardly and dastardly enemy, while the English and Scots soldiers are a model of respectability and esprit de corps.

Harry Watt filmed this, his first feature after working on short documentaries for the Crown Film Unit (notably 'Night Mail', 'The Saving of Bill Blewitt' and 'London Can Take It!').

He does well on what is essentially a low-budget piece of work, and is assisted by his excellent cast (Gordon Jackson, Frederick Piper, the aforementioned Blewitt who turned actor, and John Varley).

Not all the cast were professionals, which gives a layer of realism missing from other similar pieces. The desert fort is also richly decorated in a ruined and cracked state, which makes it an effective location for much of the film.

Interesting to compare this with glossier fare from over the pond like 'Pork Chop Hill', which also shows soldiers in adversity.

The Siege of Pinchgut