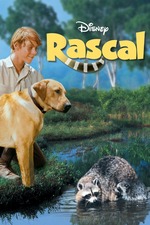 "I'm gonna train the varmint out of him."

Watched for the Disney project.

For some reason I had completely overlooked this title in the live action run of Disney movies, but here it is on Sky Disney Demand, and I'm giving it a go.

The titles might look a little like those in the earlier 'Mary Poppins', but this is a much more prosaic film, based on Sterling North's own memoir of his summer raising a pet raccoon, the Rascal of the title.

Young Sterling's mother is dead, and his father (Steve Forrest, the younger brother of one of my firm favourites Dana Andrews, but a good enough player in his own right) is more interested in business deals than spending quality time with his children.

Bill Mumy, now a musician and composer, does very well as the lonely boy who loves nature and daydreams about what he wants to do with his life. As for the raccoon, he is totally adorable, and you'll want to take one home, no matter how impractical that might be.

This is a moral tale about living with personal loss, as Rascal brings Sterling back into contact with people, and 'the ring-tailed wonder' connects more to him than any other living being during that summer.

But as he grows and flourishes from a baby to an adult, the raccoon has to go back to the wild, and Sterling has to move on with his life, and grow from his experiences.

We didn't need the Walter Pidgeon narration, though. I know this worked well with the older Scout in 'To Kill A Mockingbird', but somehow here the voice jars and is unnecessary.

Charlie and the Chocolate Factory