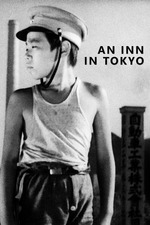 An Inn in Tokyo

Nothing matches the warm feeling of sitting across from an Ozu silent film - at least not for me at this point in my life. They are important to me right now and even though this is technically the first film of his I've given a heart (though maybe that will change when I rewatch a couple, The Only Son especially) all his movies have the perfect feeling of emotional warmth and seem to be best experienced after a long day.

An Inn in Tokyo is amazing, just amazing. Simple and snappy, heartbreaking and very, very real. Definitely the most emotional I've seen from his filmography as of yet, and it was actually his final silent picture - what a way to close off! Despite both this and the fact I've already seen his first 'talkie' I'm still certain I'm not done with his silent era yet: I'm going to go back and watch Tokyo Chorus, Woman of Tokyo and Dragnet Girl before moving on; I hadn't planned to watch more than three of his silent films but given how much I've admired what I've seen I can't not linger on this stage of this brilliantly talented man's career.