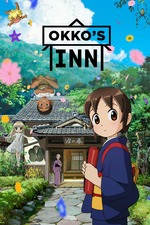 Kitarô Kôsaka’s animated adventure drama. After the death of her parents, a young girl moves to live with her grandmother. Soon, she encounters a ghost and other strange beings.

Okko’s Inn is adapted from the Japanese children’s novels, which were published from 2003 to 2013 – and the final product is a very decent one for everyone to enjoy.

Following the demise of her parents in a car incident, Okko goes to exist in the countryside with her grandmother, who is in charge of a traditional Japanese inn made on top of an old spring thought to have restoration waters.

While she goes about her responsibilities and gets ready to become the inn's next concierge, Okko finds out that there are spirits who exist there that only she can see – not frightening ones, but friendly ghosts who keep her company, participate with games and assist her steer her fresh environment.

Madigan Kacmar gives a very good voice performance as the title character Okko, the young girl who goes to live with her grandmother and gets more than she bargained for, but not in the scary way that she thinks, while Glynis Ellis is decent as Mineko, Okko’s grandmother who acts like she is in charge.

Elsewhere, KJ Aikens is fine as Makoto, the ghost who only Okko and see and he is one of the ghosts who attempts to keep Okko in a positive mood.

The direction from Kôsaka is very good because he allows the facial expressions to be seen to a strong effect throughout, while also keeping a mixed atmosphere happening as well.

The script is written to a decent standard by Reiko Yoshida as he makes the movie good to follow and creates some humour too, meaning the movie never takes itself too seriously. But even when the movie isn’t funny, you can still understand what is happening, because the narrative is definitely there from beginning to end.

The camera stands out best in terms of the technical aspects, because it makes good use of the locations and also captures the tense and funny moments well, which get the edge-of-the-seat status.

It is kind of impossible not to think of Casper, the family comedy adventure with Christina Ricci about a young girl who encounters a friendly ghost.

The only criticism I have is that the pace is a little slow at times.

Overall, despite the pacing, Okko’s Inn is a very decent anime, due to the good voice performances, direction, script, mixed atmosphere, some tension and some humour.