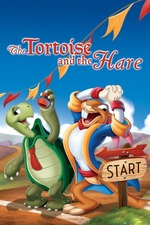 Ned Norton and Eddie Holden both give excellent voice performances in their respective roles as Max and Toby. Max is the hare who is very speedy, damages nearly everything he passes and even has time for a nap, a conversation and showing off his sport skills, while Toby is the quiet and shy tortoise who likes to take it very easy and slow as possible.

Who will come out on top in the race between the two?

The direction from Wilfred Jackson (who is uncredited, which is just not fair) is excellent because he allows the facial expressions to be seen to a strong effect throughout, while also keeping a pleasant atmosphere happening as well. The script is written to a terrific standard as the movie is really easy to follow and has humour too.

The camera and music stand out best in terms of the technical aspects, because the camera makes very good use of the locations and also captures the funny occasions well, which deservedly get the edge-of-the-seat status; the music is enjoyable to listen to.

Overall, The Tortoise and the Hare is a very enjoyable animated short, due to the excellent voice performances from Eddie Holden and Ned Norton, along with the story, humour, pleasant atmosphere and some technical aspects.