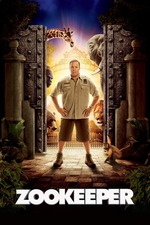 In Frank Coraci’s comedy, Kevin James plays a zookeeper who decides to quit his job at Boston’s Franklin Park zoo in the hope that more sophisticated employment will help him win the woman of his dreams.

Generous Griffin Keyes (Kevin James) is one of the much-respected concierges at the Franklin Park Zoo, but as he is more relaxed with the animals than with ladies of his own type, his love life is not doing too well.

When Griffin chooses that the only way to get a female lover is to find a more-stylish occupation, the animals worry. To stop him from quitting, they disclose their underground aptitude to communicate and offer to teach him all about wooing, but animal style.

Kevin James gives an OK performance in his role as Griffin Keyes, one of the much-loved caretakers at the zoo who feels he needs a career change, only to find out something that he never thought his animals could do.

Elsewhere, Rosario Dawson and Leslie Bibb both give OK performances in their respective roles as Kate and Stephanie. Kate is the vet of the zoo, while Stephanie is Griffin’s love interest who refuses to tie the knot with him.

In terms of the voice cast, Nick Nolte is Bernie the Lowland Gorilla, while Sylvester Stallone is Joe the Lion and Adam Sandler is Donald the Capuchin Monkey. Also, Judd Apatow is Barry the Indian Elephant; Cher is Janet the Lioness and Jon Favreau is Jerome, one of the two Grizzly Bears.

The direction from Coraci is OK but it should have been better, such as showing more facial expressions to a stronger effect throughout, as well as having more of a pleasant atmosphere happening as well – this very rarely occurs.

The script is written to an OK standard as although there is a narrative happening, it’s unfortunate because there are not many moments of humour to be had, and on some occasions the narrative is weak in places and there are scenes that did not need to be in the final edit, so the duration didn’t need to be for as long as it was.

I also believe there are a few happenings where the movie tries to be funny – and fails to succeed in doing so, which is perhaps the main reason as to why this movie doesn’t work.

The camera stands out best in terms of the technical aspects, because it does make some good use of the locations on offer.

Overall, Zookeeper is a movie that is not clever or funny, due to OK performances, direction, occasionally weak script and lack of humour. The younger generation may enjoy this, but adults won’t.