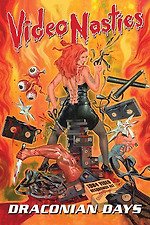 Jake West and Marc Morris’s first video nasty documentary Moral Panic Censorship & Videotape, was both a nostalgia piece which shared much common ground with the excellent Rewind This, examining the birth and blossoming of home video, and also a seething polemic on the scandalous victimization of horror films caught up in a controversial crossfire thanks to self-appointed moral guardians and God-bothering crusaders. Exploring the lawless days of unregulated pre-certification, it was a savage indictment of heavy-handed censorship and shameful political points scoring. As informative and passionate as it was, it also has to be said that Moral Panic wasn’t exactly the most impartial documentary work of all time, it was very much from a horror fan's point of view, largely formulated from testimony and sound bites from some of the genre’s finest writers, directors, academics and experts. And Allan Bryce.
For their new follow-up film, Draconian Days, West & Morris have delivered an equally insightful and critical work, but also one that is far more balanced and considered in its approach. Whilst covering similar ground, this concentrates more on the post-VRA period of the late 1980s-mid 1990s, where a tabloid manufactured moronic frenzy raised its pointy little head once more when the terrible murder of toddler James Bulger was reprehensibly and fatuously linked to the otherwise innocuous mainstream horror film Child’s Play 3. Suddenly a new wave of censorious lobbying flared up instigated by ill-informed politicians like the odious opportunist David Alton. Instead of repeating their first documentary’s stance of a single-minded anti-censorship manifesto, Draconian Days digs deeper, allowing a more rounded appreciation of the turbulent times, as it goes on to profile at length the actions (both bad, and indeed good) of the BBFC and its all-powerful head honcho James Ferman. It's a fascinating, often frustrating and sometimes eye-opening examination of our country's film regulatory body, which forms the main backbone of this movie. But there’s so much more here too, including the way this period of unprecedented and demented scandal and censorship gave rise to an underground network of horror film fans, raging against 'the man' through fanzines, tape trades, film fairs and festivals (which were very much the foundations for the likes of the current Frightfest).

And this is where I confess a vested interest, for I was very much a part of this scene back then. I know (or knew) and corresponded with just about every talking head in this film (Marc Morris, David Flint, Spencer Hickman, Stephen Thrower, Alex Chandon etc), I published my first fanzine – ‘Whiplash Smile’ back in 1987, one of the UK’s first wave of dedicated DIY horror zines, and it actually makes a brief cameo in this film. I was part of the Scala crowd featured here, I was a tape collector and trader, I was a list swapper (you’d be amazed if I told you some of the people I traded outlawed tapes with!), I lived in constant fear of being raided like some of the unfortunate folk featured here (Hi Dave!), these were indeed dark, dangerous, Draconian days, but the sense of community which thrived in such adversity was incredible back then, despite the stigma attached to horror fans and horror films in general. Then in 1992/3 just as the whole Child’s Play 3 scandal and moral hysteria went cataclysmic, in an act of spectacularly ill-judged timing I was launching a prozine called ‘Monstroid’ - glossy, full colour, professionally printed, much wider distribution, but we were seriously battling against the odds as the strict pro-censorship agenda took a grip on the nation’s conscience. At the time we ran articles on the whole James Bulger tragedy and Child's Play 3 fiasco, echoing much of the material featured in this documentary. I even ran an impassioned rant on the subject from best-selling Slugs author Shaun Hutson, who just wanted to vent his spleen, feeling as outraged, victimised and powerless as the rest of us. I published one of the very first reviews in the UK of Reservoir Dogs, long before Quentin Tarantino was flavour of the month, and let’s not forget that in the wake of all the strict legislation and sanctimonious campaigning covered in this documentary, Reservoir Dogs itself was very much outlawed, along with the likes of Abel Ferrara’s Bad Lieutenant and Oliver Stone’s Natural Born Killers. It certainly wasn’t just Italian cannibal movies and video Nazis which were seen as corrupting the nation’s feeble, impressionable minds. Today, thankfully, the tide has turned somewhat and the BBFC have become a far more advisory than regulatory body, although censorship and film banning has by no means disappeared (the ridiculous recent case of Axelle Carolyn’s Soulmate makes for a depressing example should you care to research it). As for the press, they seem more concerned these days with linking all the country’s ills to immigrants and benefits claimants, rather than Lucio Fulci films or killer doll franchises. Draconian Days reflects this too, the way the internet and the availability of multi-region DVD has essentially made censorship in its traditional forms redundant, and how attitudes change – the vast majority of the old video nasties are now readily available on uncut high definition discs, and yet somehow as a society we haven’t all turned into blood-thirsty maniacs and deranged serial killers as a result. I guess we live in more enlightened times, but you know what – for all the outrage and idiocy of the period Draconian Days covers, I kind of miss that communal vibe, the old fanzine days, it was exciting, underground, illicit, had a real anarchic, punk aesthetic to it, a sense of being a part of something vibrant and rebellious that sites like Letterboxd or social networking just can’t replicate. Draconian days maybe, but somehow looked back upon with a strange sense of nostalgia……..or maybe all those Z list slasher movies and sleazy rape/revenge epics have simply irrevocably warped my mind?