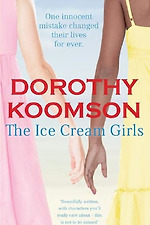 This ITV drama is based on a novel by Dorothy Koomson. I haven't read the novel so I can't say if its action upon the page was faithfully adapted for the screen, but what I can say is that I really rather enjoyed this.

The Ice Cream Girls is the story of two vulnerable teenage girls, Serena and Poppy who, in the summer of 1995 are accused of murdering a schoolteacher who was having a sexual relationship with Serena - a relationship that was not only an abuse of his position but also became a series of serious sexual abuses upon Serena as he brutally raped her as 'punishment' for minor errors he believed she would make, which resulted in the pair's attack upon him. At the trial Serena was found innocent of the crime, whilst the blame was placed firmly and fully on Poppy's head. The media attention on the court case meant that a photograph taken by the victim featuring both girls licking ice cream on the seafront whilst wearing identical dresses led to the nickname (and the title) for the pair.

Seventeen years on in 2013, Poppy is released form prison and determined to prove she was innocent all along. Meanwhile Serena returns to her childhood home with her husband and teenage daughter to care for her dying mother. It isn't long before the former friends are forced to confront each other and their dark, shared history.

The director Dan Zeff delivers a nice no frills treat that is in keeping with ITV's strong tradition of solid crime drama mini series whilst Jodhi May and Lorraine Burroughs are very good as the friends reunited, Poppy and Serena. But just as impressive are Derek star Holli Dempsey and Georgina Campbell (who this year surprised many by beating both Sarah Lancashire and Keeley Hawes to the BAFTA for Best Actress thaks to her performance in Murdered By My Boyfriend) as the teenage duo, whilst Martin Compston is suitably chilling and repugnant as their manipulative victim.