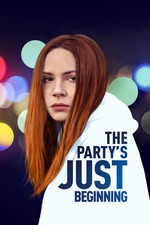 I'm a big fan of Karen Gillan so I kind of wanted to like this, her feature length directorial debut, more than I ended up doing. I think the issue is one of expectations. I'd heard some people were left cold by The Party's Just Beginning, but I put that down to them likely being fans of Doctor Who, the Marvel universe or Jumanji who were totally alienated by her natural Scottish gallows humour. Because this is billed as a comedy, albeit a dark one. Trouble is, I didn't really find that the comedy aspect truly worked. I expected something as wickedly dark as Gillan's short, Conventional, but that dark streak of humour isn't really there. Instead, The Party's Just Beginning is a film that depicts some heavy issues but with a sardonic air. The opening sequence, an almost Trainspotting-like karaoke rant, promises a style that ultimately the film doesn't pursue. This is more of a dramedy than an exercise in experimental blackly comic subversion.

That said, you have to admire Gillan's balls to tackle such heavy subjects as male suicide, religious repression, closeted homosexuality and transexuality, sexual violence, depression and addictive personality, and she remains a compelling presence, brave enough to show a far less glamourous side here - all spotty, pale features in the dour and bleak Inverness winter - than she is given to offer in the Hollywood blockbusters that have made her name. I really hope we see more of Gillan as a filmmaker because, despite its flaws, The Party's Just Beginning shows a lot of potential, and also because I feel that she would benefit greatly from having a sideline as an indie voice, which the paydays from the blockbusters would obviously allow her to explore. And we need more female voices like this on film.

The Kemps: All True