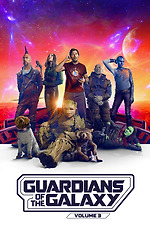 Does nobody wish that the Guardians movies weren't part of the MCU?

I'd have loved this to be a third movie that lets the trilogy stand alone. One of the overarching villains, Thanos, gives a chance for Gamora, Nebula and Drax to get conclusions to their arcs. The other one, the golden lady, could be a good villain opposite Quill, and Adam Warlock could be a chance to explore Rocket's past as a science project.

And it'd be nice to see Gamora finally becoming able to lower her defenses and form an emotional attachment to Quill, and to see Drax learning to let go of his past and move forward in life with Mantis, and to see Rocket and Groot's father-son dynamic wrap up nicely (and if this was the movie where Groot was a teenager, it keeps the one-note nature of his character fresh for yet another film).

But instead everything interesting about these characters has happened offscreen, we're back to square one with Quill and Gamora, I don't know where there even is to go with Drax or Nebula or Mantis or Groot, and I don't think the one thing I was interested in (Thor joining the team) is even going to be a thing.