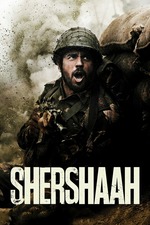 I'm just speechless.
This movie has been in the making for 6years, and all the dedication and hardwork put in by people shows. Based on the life of PVC Captain Vikram Batra, Shershaah follows his story from the locales of Palampur to his contribution in the Kargil War.
The cinematography is amazing. Shot in Kargil, the war scenes look authentic and take viewers right in the middle of the action. The writing could've been a bit better as some of the scenes seem straight out of a tried-and-tested war movie mould.

But this movie is not about the technical aspects, it is about the brave soldiers and their sacrifices in times of need. It's about feeling the emotions and immersing yourself in the story. The movie doesn't overdo themes of patriotism and there is no overdramatic Pakistani hate shown. The movie successfully shows a bilateral war without getting preachy or overtly nationalist. The songs are top-notch, and each song makes you emotional and feel for the characters and their situations.

Coming to the performances, the more I say, the less it is. Each and every person potrays their character to the T. Be it the role of a rifleman who appears for 2mins or the titular character, everyone has delivered and how! Kiara Advani potrays her role effortlessly (when she's not trying to speak Punjabi), Sahil Vaid, Nikitin Dheer, Shataf Figar, Anil C, Shiv Panditt - all of them had a good role.
Coming to the man of the hour, I can't speak enough of him. Sidharth Malhotra in this movie is simply exceptional. His effortless transformation from a sweet Punjabi munda to a hopeless college romantic to the duty-bound armed is a treat to watch - he smoothly transitions into different roles when in conversation with different people. His grit and determination is clearly visible. Sidharth was approached for the role by Captain Batra's family, and he has done full justice to the faith they put in him. Being involved right from the inception of this movie to it's release, his commitment to bring the Martyr's life to screen is truly commendable.

I know many people find it drab or 'oh-another-war-movie' but this one is for people who enjoy cinema just for the love of it. You cannot analyze and dissect parts of it just because it wasn't jingoistic or 'joshila' as much as you wanted it to be. It's a biopic, he filmy dialogues have been taken from real-life and can be corroborated with numerous interviews and pieces ranging back to 1999.