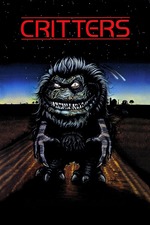 So...this may sound like midlife crisis crazy talk, but I've had it with here/where my life is at right now, and so I've come to a very important decision on where my journey is taking me:

I am serious. It looks amazing. I want E.T's mom to be my mom. I wouldn't even mind having to live on a farm because I would have an awkward Billy Zane to tell me about what life is like in the big city instead of make out with me. Billy Zane does not seem to want to make out with anyone in this movie. And that would be okay with me because he is not really my kind of thing. Sorry I am just being honest. Something about his face is just overly shiny and weird in this way where I would become frightened that he was actually wearing a rubber latex mask, and then I would start to worry that maybe I was, too, and I would probably just freak the fuck out and it would be seriously awkward for both of us.

I wouldn't care that the only music in the whole entire universe is 'Power of the Night.' That is fine. That song is rad. It wouldn't even bother me if, like the drunk guy on his bike and that cop guy, I'm never able to get further than three miles from Grovers Bend as evidenced by the cop guy actually running off the road at that point and showing us the sign again that says 3 miles outside of Grovers Bend and hey, buddy. I know about film. I know when someone is trying to tell me that a place is not just a place but an alternate universe/loop in which the characters are trapped for all time!

It's still cool with me BECAUSE I recognize that fragment of conversation between mr and mrs brown as the movie Jennifer is watching right before freddy welcomes her to prime time! Meaning I could dimension cross into that dimension through the tv (before jennifer's head goes into it of course) for a game of d&d with Taryn and Will! They will have to teach me, of course. I hope they don't mind. I mean, Taryn barely seems to know how to play from spending all her time in alleys doing hardcore drugs so it should be fine. (taryn and will are more my kind of thing btw sorry for oversharing.)

I'm thinking the only flaw in my plan is, they would have to explain who I am in the Grovers Bend a verse. I'm thinking will (from party of five)'s troubled cousin, Khloe with a k who shows up from somewhere, and is never explained, but she's there now living with the browns, probably wearing some sort of goth face/hair/choker but with a terrible miniskirt/pair of legwarmers (and a torn up tshirt of Johnny Steele because in this reality there is no Terrence Mann THERE IS ONLY JOHNNY STEELE).

And maybe they don't even bother giving me a vague big city where I have come from and they just say 'the city' or maybe it is Chicago (but it's only mentioned once). I would get will from party of 5s room while he is banished to the couch or a screened-in porch and I threaten to call on the forces of satan like I have eyes in the back of my head the second he or Charlie takes out that slingshot so he is too frightened of me to retaliate for the room theft. AND I would hang my satanic band posters up OVER his poster of the police so I don't have to look at sting's creepy face while I am trying to sleep/commune with satan.

Here are the main bullet points for the brochure from Grovers Bend I just received in the mail because they do not have a website:

*the local bowling alley is just called the bowl-a-rama lanes.

*If bounty hunters destroy your home you are OUT OF LUCK because we just don't have the budget to do anything. I mean, we still have to rebuild our only church which was destroyed during a really bad joke about gays being terrible/comic relief (unless we were really having a joke at the expense of small minded hick republicans...YOU decide). Anyway even if the former, it's the 80's don't be such a millennial crybaby snowflake

*IN FACT, we are not even going to take the church's destruction as like, a sign that we should be more tolerant of others like I'm sure the bible says somewhere we are actually going to pick up exactly where we left off as soon as it is rebuilt! Besides, there's like this thing that happens later. We don't understand it, but it's cool.

*Women here act like women meaning they get dragged off while unconscious or else cry after being sedated during the entire attack on the homestead and anyway THAT is all women are good for despite this making no sense at all in April's case because they aren't even the same species but whatever.

* Here in Grovers Bend, the town drunk is encouraged to continue to drink as long as he shuts the f up about ufo's for crying out loud for once, instead of a lot of hippie bleeding heart liberal nonsense about getting help and sharing your feelings and you're a drunk because your mother didn't give you enough hugs or cookies!

*I mean here people mind their own business and let people live their lives.

*Unless they are dressed funny and then it's comments about dog collars dogs in general as a derivative comment about your looks/sexuality (this means you, Khloe).

Huh. Okay, so maybe this is not the right place for me. Or maybe cousin Khloe will defy conventions and teach people stuff amidst all the mayhem! And I DO really like the way the cat is an important family member which, from what I remember about my mom's cousins that lived on a farm, are usually just considered pest control and have to live out in the barn. They are not thought of as pets generally so maybe the browns are not as conventional as they seem?!?

Even hulu agrees about the multidimensional thing and immediately suggested I watch Nightmare 3 and in fact, if I don't do something to stop it, it totally will play Nightmare 3! (Which would be okay, but I heard that during the arts and crafts section at the beginning credits in the box set DVDs they changed the song that is playing on the radio to something else Dokken) which I don't think I could handle because it's the WRONG SONG meaning it would be a scary off dimension where freddy in fact did resemble a giant flesh colored penis and not a green one when he is eating Patricia Arquette and that puppet turns into (insert whoever you consider truly scary) and then all the other puppets turn into other stuff that you consider scary!

Like they just zoom in on my face looking terrified and can't even show you who I saw because it's my personal bad thing? Which somehow makes it even scarier/worse? Because then it's like you are inside my head but I am ALSO INSIDE YOURS?!?

Good thing I have that one on vhs.