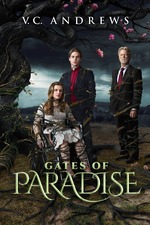 Ok so it turns you are related to your horrible great-step-grandfather who is actually your grandfather by also being his niece because your mother and her uncle...

Hey but at least you are not related to your brother

(The twist ending is that someone finally isn't related to someone)

For some reason, it really bothers me that there are antlers on the storybook cottage beyond the maze. Nothing u turn into a music box needs to have effing antlers on it

The antlers were probably his idea

I mean but Pin was cool though PIN!!!

They are doing Ruby I guess? I woulda thought Dawn as in that one, she is attracted to her brother only he is just the son of the man who stole her as a baby and then the dude she is dating or went on one date with rather, is now her actual brother, who is still into her and actually sexually assaults her and then she is sexually assaulted by her music teacher? I dunno, it's been a long time since I read that at an inappropriate age cause I got it at the thrift store.

See, the Virginia Andrews formula is just some people will sexually assault you and the Neiderman formula is that hashtag all men sexually assault women. You know the other thing I got out of her books is, this was still somehow a safer place than age inappropriate books that you found at the thrift store written by male counterparts like Stephen King or Dean Koontz (or like just PRAY you didn't accidentally stumble across some of Laymon's books written for teens, like I did) and men who read those when they were much younger don't seem to think anything was fucked up about it yet somehow, women are fucked up and dumb for reading these ...

There is this dude I don't like much but try and get along with (that's the thing. When you are terrorized into silence enough, no one can ever know if you genuinely like them or are just trying to avoid the often lightning quick way men on the internet can become a sort of natural disaster if they decide they are angry enough) was talking about recommending IT to his like, nine year old daughter because he wants her to read something he has fuzzy nostalgic love for and not the BSC books which, as a man, he never read.

Actually, quite a few of the BSC books read weird to me knowing Peter Larangis was the ghost writer. Maybe if he were informed that men inserted themselves even into that, he would feel better.

This is why I don't really talk about Stephen King on Instagram, even though it would be easy likes. But I don't want them and in fact, I've found most easy likes don't sit well with me. People are pretty sneaky about pretending they aren't liking because you went off brand or because you are shoehorning and really, it's that they feel uncomfortable. I mentioned once non binary makes sense to me but I'm not sure and immediately, someone rushed to insist I shouldn't label myself - not because they were uncomfortable, but because I shouldn't limit myself. He was just looking out for me, you see.

Which is, since someone recently mass bullied basically everyone he is following for not putting pronouns on their bio (which includes me) why I don't. I know it's mostly cowardly, but there is also part of me that doesn't think it's worth making a fuss over, as she/her is just as ok with me, tbh. And also, I didn't know you could have both she/her and they/them. I didn't know that was a thing and I didn't want to get in trouble for saying the wrong thing or offend anyone.

Plus, while they, being male, do not need to use up precious bio characters telling men to please, please do not follow me just because I'm female and you want childcare or someone to chat with when you and your gf are fighting and I can't spare that space to occasionally feel gender neutral. But I can't say that on ig because I'm terrified of being cancelled before I can even start! I haven't even gotten a shitty pilot yet with actors no one will ever see again!

I am also really having a money problem and when the pandemic started, I decided I was only going to post physical content I already had. I bought a few things which are floating around that would make my reading list a bit more diverse (I realize that's the old school, performative word but I'm already, after giving everyone else so much grief, prepared to beg please don't cancel me, I'm old, I didn't know any better, it's what they said when I was growing up and I have gotten used to saying it) but I have to fit things into a theme because I just can't go back to the daily panic of spontaneous posting so sometimes, I have to wait until the perfect theme presents itself.

Though I am glad I remembered Us is a beach vacation horror in time to order a physical copy! Tbh with all the other fun fucked up stuff of that movie, I totally forgot about the beach part!! Another problem I am having is not just the money end of it but how long shipping here takes, I have to know what the themes are months ahead, so that things have enough time to ship here.

Also, the pandemic is disproportionately worse for others but it is still no joke that I have a highly contagious job I have to be able to afford not to go back to until there is a vaccine. I don't have a lot of money to spare which sucks because all I want is to help people there are times I have considered just having that be my entire query: PLEASE get me out of this pandemic so I can help people through writing and donations! I think this book will help!

A lot of agents say they want authors who try to make things better or make a difference. The problem is, my that just looks like being exploitative and messily murdering people and maybe that's true. Maybe it is. But I want more and when I say more, I don't just mean money for VHS tapes. I want a better future for me and everyone else.

Which is why it kind of stings when agents act like they are just so eyeroll sick of reading gender reversal society dystopias because they are childishly reacting to Trump being elected, like omg so bored with that! Sorry I am not bored with that as it is actually literally killing people. I think this book could help but maybe I'm just kidding myself.

I also really just started doing books and am still at the stage where the posts won't do well unless the horror author is male. Preferably white and male. It doesn't have to be Stephen King. It could also be Grady Hendrix (or any of the male authors referenced in his Paperbacks from Hell) Joe Hill or Peter Straub or sometimes, if you are Canadian and a bit indie, Nick Cutter. None of this is me trying to excuse anything. My reading list should be more diverse (ugh that word again) but the posts simply won't do as well.

Then again, the reasoning that, once I get a fan base I can post something other than those male authors doesn't really hold up. People still expect you to continue doing what they started out liking in the first place. So, I think you just have to accept the fewer likes and followers (though I hesitate, honestly, to make that a merit badge of my wokeness - look how many people unfollowed me last month) and try to attract a similar audience for what your content has evolved into. Eventually, I will have maybe a few fewer tapeheads, and a few more bookstagrammers. It's not that I don't like tapes. Clearly, they are my entire life. But I can't attract future readers through horror fandom.

I am simply the wrong pronouns.