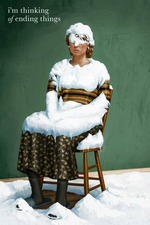 reddit miserabilism, peak incel cinema, third feature and kaufman still can't direct to save his life, his idea of horror is making vaguely mentally ill characters scream a lot in rural areas, when a character forgets where they are multiple times in a scene then that's comedy and when they say they hear voices that's supposed to build tension, the montage looks like a papa johns commercial, the netflix a24 algorithm has now spread all over the world and it digitally renders toni collette's hereditary performance into all movies in existence, there's a scene where the main couple enters a barn and i was like "ok, now the girl's gonna talk about how sad the sheep must be or something", then a few seconds passed, we enter the scene, she walks around, oh look, sheep, the human condition, the vanity of existence, the world is hell: hopeless cinema. what's even the point charlie, you cleary hate directing so why keep trying, your old fanbase is well past their 20s by this point and they all seem increasingly ashamed of ever having liked your movies in the first place anyway, and no zoomer is ever going to watch being john malkovich voluntarily. every marvel movie is better than this.