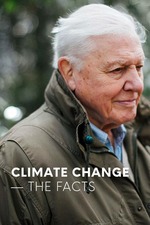 Narrated by David Attenborough, the focus is CO2 and global warming. Nearly a third of CO2 admissions are caused by deforestation, fields used for cattle or clearing rainforests to make room for huge palm oil plantations. Palm oil is in many products we buy (margarine, bread, soaps, shampoo, chocolates, ice cream).
Provides disturbing predictions. Methan gas can cause an acceleration of global warming as it’s 21x more powerful than CO2 (this is one of the so-called ”tipping points”). There are tons of frozen lakes in the arctic which could release methan if they melt. But not all bad news, Iceland have one of the world’s first carbon collectors.
Sea level has risen by about 20cm in the last 100 years which so far affects Bangladesh, Indonesia, and Jean Charles, Louisiana in the US which loses a football field every 45 min and citizens become so-called climate refugees. By end of 21st century our planet will potentially be between 3-6 degrees warmer. 600 million live in costal areas that are less than 10m above sea level. If we don’t do anything, we could be looking at 80cm to 1m rise of sea level.
James Hansen warned Congress in 1988 that he was 99% sure the increase in carbondioxid had led to warmer temperatures than any time in measured history. The fossil fuel companies for oil and gas are some of the most profitable businesses in human history and didn’t want a change.
How we can make a difference in our own lives:
-Eat everything we buy, less waste.
-Avoid air-freighted food which is 100x more impactful to climate change than putting it on a boat.
-Insulate our homes which wastes less heat.
-Reduce meat and dairy consumption, especially beef and lamb.