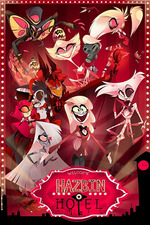 >Character refuses to shake protagonist's hand as she proclaims she doesn't "touch the gays."
>Said character starts touching and prodding the protagonist after barely two cuts.

So my biggest problem with Vivziepop's other animations rears its head here - namely, the unrelentingly hyperactive barrage of images and colors and animation that confuses quantity of movement for quality. Hazbin Hotel seems a bit more focused than, say, her Timber AMV, but there's still this scattershot quality that permeates everything - the writing from moment-to-moment and scene-to-scene, the plotting, the world building, the character design, all of it. At times it feels like we're only getting half of a pilot, because so much of the setting details that should inform the characters and the premise are sketchy and poorly laid out. Maybe there's some blog post in the depths of the internet that is supposed to explain everything, but for the uninitiated, it's a mess to untangle.

And you know, the law of diminishing returns applies even to Deviantart-esque slasher smiles (everything, even the characters' hats, have that goddamned smile). It's also amazing how awkward and forced so much of the swearing feels, calling attention to itself in a way that is really distracting. All of the aesthetic and writing choices create this end product that is like the embodiment of juvenile "edginess." If someone asked you for a definition of "edgy" and you showed them a sample of Hazbin Hotel, they'd grasp the concept pretty quickly.

Yet, despite all my criticisms, I think there are some genuine bright spots here. I enjoyed a few of the character interactions, and some of the one-liners were amusing. The pilot's breakneck pace makes it, at the very least, an easy watch. Plus, I think it is kind of admirable as the achievement of an internet artist pouring her heart into a passion project of hers; this is a production at a scale that I think few, if any, other Youtube animators have managed.

Am I dying to watch Hazbin Hotel: The Animated Series? Not really. However, as I mentioned previously, it at least shows improvement from Vivziepop's earlier works, and it has its endearing qualities. Who knows, you might even find the "ow, the edge"-iness of it all somewhat charming.