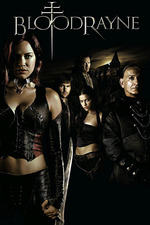 Gore, vampires, terrible fight choreography, boobs, wooden acting, and some truly bad hair, especially on Billy Zane and Meat Loaf. This is a veritable who's who of over actors, Zane, Madsen, Loken, Rodriguez, Paré, Loaf, Kier, Kingsley (some are good in the right roles obviously, but this ain't the right role), all corralled by the godfather of boxing and crap movies...Mr. Uwe Boll!!!!!

I enjoy a lot of his crap movies, and this is no different. It was really slow to roll, but once there was a massive battle sequence in a castle and the blood started spraying and a dude was hacking up another dude even though that dude's innards were splayed all over the ground, well I got on board the Bloodrayne train (it did hit a couple of boulders on the track) and went for a wild ride. And then Mr. Boll has a little recap at the end for people who may have fallen asleep.

...so not recommended for anyone except me!!