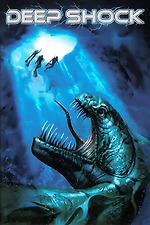 Horror Hunt #25 (July 2020) Day (15) I have a fish named Kevin Hot Dog who just celebrated his 10th birthday. Watch a film with a killer fish or aquatic creature.

A rare time when I was a wee bit soused while watching a movie. I haven't had a drink since possibly last year, or maybe January, who can remember??? But yeah I'm feelin' fine on my Caesars....so maybe I enjoyed this more than I normally would've or maybe I liked it less because there seemed to be a lot of shooting torpedoes that seemed to take hours to get to their target and also a lot of people explaining things or making plans that I didn't quite get. But maybe I missed it. I'm not a huge fan of going into a movie expecting underwater electric eel carnage and not only barely getting any but also finding out they're intelligent and I guess we're supposed to feel bad for them or something? They didn't seem to care about humanity, which I get, but I also don't want all my stuff to get flooded, which I think was their plan or something? Whatever. There was an evil or selfish or just dumb scientist who was wrong about everything and then on the other side there was David Keith (Not Keith David!) and his ex-wife scientist re-love interest who know the score....eventually. And there's lots of scenes with representatives of the G8 deciding to nuke the North Pole which was pretty dumb but sorta entertaining and the scary cgi electric eel creatures sometimes looked like slimmed down, legless Pete's Dragons and sometimes like sea serpents you may have seen in OLDE TYME(E) books but really, really cgi. Really.

At least it moves at an ok pace but I was pretty sure they kept firing torpedoes. And I don't know what they were hoping to accomplish....oh yeah seal the crevasse. That's right!

That poster is gorgeous! I'd like to own it. I bought the DVD but ended up watching this on Prime. But I'm happy to own it anyway cause 1. The poster looks good even at DVD size, and 2. I like this kind of movie when I'm exhausted....or apparently tipsy. Yeah. Tipsy.

I loved the way the bad guy died. I almost would've preferred he sink down a deep hole and just be stuck there till the air ran out, which sounds mean of me to say, but the dude playing him is always a skeez or a bad guy in everything I've seen him in......but I liked the way they went anyway.

I just looked at Phillip J. Roth's other movies....I pretty much want to watch all of them.