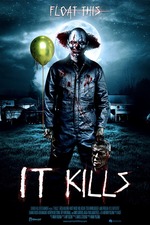 I was in the mood for a crappy, ultra low budget, is-there-anything-lower-than-Z-Grade actors, kind of slasher. This fit the bill perfectly. The people in this have no ability to see a dude in a brightly coloured clown mask standing 2 feet away from them, but I guess that's fair when the killer can't see a girl in broad daylight, who was running slightly ahead of him, crouch down next to a bush...on the side she was running from! The trees also seem to move around a lot in this magical forest, depending on whose perspective it is. If it wasn't for the addition of a couple who had recently broken up and spend waaaay too much time snarking at each other, I would've said this is a great crappy, ultra low budget, is-there-anything-lower-than-Z-Grade actors, kind of slasher. But they were added to the movie...though one of them apparently has inflatable innards so maybe that explains her crankiness....so I can't get behind this 100%. But I enjoyed myself. Not many people will. But I did. Stumbling, clumsy, clown mask serial killers are my jam apparently.