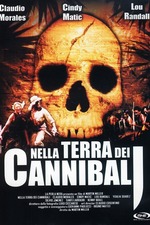 When some people rip off a movie, they at least try to hide it and add in their own ideas. When Mattei does it, he lifts lines directly and even adds in scenes from the movie he's "referencing" to the point that those scenes don't even make sense in the flow and feel crammed in. I get it. You're ripping off Predator. But with Cannibals. Sounds fun right? Not so much. Needs more gore. Need more over the top action, some more bad dialog (the best line is one basically lifted from Predator "I don't have time to bleed"), some more cannibals munching people would be good, and of course get rid of the score that sounds part The Asylum music library, part Alan Silvestri....if he was really really exhausted that day.

On the plus side, even though I was sure it was about to happen, they didn't show the pig getting killed, which means it probably survived....right?

Oh and the scene of them jumping from the top of a waterfall was cool.

The Last Vampire On Earth