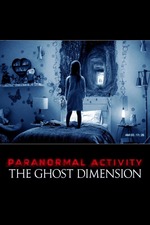 I really have enjoyed this series, even the lesser part 4 and the Marked Ones, but this movie is pretty much bad. It has a decent idea and a couple of cool scenes, but it's so slogged down by characters that don't react in any way like a real human would and so much cg that just takes away any chance of feeling tension or dread (Seriously, there's a few moments that the cg was so bad that I couldn't believe this movie was made just last year).

It really doesn't feel like a Paranormal Activity movie, except for a few surface things. That wouldn't matter too much if they'd done something new or interesting but this really has nothing to offer except for boredom, a couple of jumps and the occasional bout of rage.