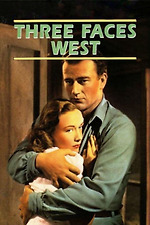 Wild West Summer 2020: Watch a Western that centers around a journey.

A total failure for the Wild West challenge and pretty much a failure as a journey movie. There's about 20 minutes of a trek to a new location to set up a new town at the end, but that's about it.

This is actually a hardship movie with some romance mixed in. The travails of a small town that can't grow anything due to dust storms, and their attempts to keep the town going in spite of not much hope. And John Wayne is pretty much the town's leader when he's not hitting on the new town doctor's daughter. The movie's a little depressing and you don't get quite the happy ending that you may expect (unless you've read the synopsis), but I wouldn't say there's much there there. Maybe if you enjoy people being somewhat miserable (in a weirdly cheerful way).

But no horses, they all have cars, no Cowboys nor Cowboy hats. The cover of the blu ray shows John Wayne punching someone out in a Saloon , which makes this look like a Western. I suspect the fine folk at Olive (or the company that originally released this) didn't know how to market this movie, so they put that scene on the cover/poster, even though it's a part of the movie that really doesn't mean anything.

What the Waters Left Behind