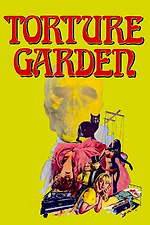 To be honest, I liked the wrap around story the best...well it's not much of a story, but it has Burgess Meredith playing a carnival huckster/something more diabolical, so that's pretty great.

The other stories are fun but a little bit slight. There's a man that does the bidding of a cat for cash and prizes (but who doesn't do what their cat tells them?), the truth behind longevity of Hollywood actors, a jealous killer piano, and a final story starring Peter Cushing, Jack Palance, and a reanimated Edgar Allan Poe.

The Long Hair of Death