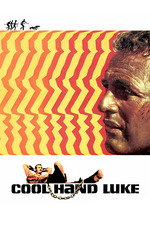 Perhaps too easy in this case, but nonetheless....simply a damn cool film.

One of the strongest aspects of this film has to be the world-building on display. The initial minute of the film consists of Luke taking the heads off of parking meters, and from that point we are taken directly to a rural prison. From that point in the film the prisoners are swept into a land of pure isolation, desolation, and outright oppressiveness. The atmosphere and dynamics inherent to said prison ultimately drive the viewing in many ways.

The initial hour is spent establishing the rigid structure of the prison along with its inhabitants. This time is spent developing Luke and establishing the hierarchy among the prison population. It absolutely eases the viewer into the overriding themes of the viewing, but there's an important scene about a half hour in in which Luke's mother visits. It's a small scene, but one that carries heavy ramifications throughout the remainder of the film.

Midway through viewing Luke's mother passes away, and the warden decides to put Luke in the damn box for the day in order to avoid a possible escape. In many ways this is the point where the film really gets going, and what follows is a series of escape attempts despite increasingly excruciating punishments. It's interesting that Luke is the one with a moral code. Initially he was fine to tow the damn line, but once they treated his mother's passing with insensitivity, all went out the window, so to speak.

This viewing is ultimately only as strong as the character of Luke, and thankfully Paul Newman assures that Luke is in fact the driving heart of the entire film. In many ways the character of Luke transcends merely being a prisoner in a film. He absolutely feels larger than life, and most importantly, is the type of character in film that attains legendary status as a result of his handling. In the end all viewers can likely relate to Luke in some form or fashion.