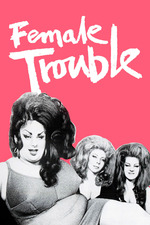 When I re-watched this, I had my laptop near by to write down a few quotes that I liked to use in this entry. I do it a lot: even though I usually post stuff on here without quotes, I usually write down one or two while watching just in case I decide I want one. It's a habit.

Here's what I wrote for Female Trouble:

"I've told you repeatedly, no jumping rope within 10 feet of me!"

"There is no need to learn about the presidents, wars, numbers, or science."

"I've done everything a mother can do! I locked her in her room, I beat her with a car aerial, nothing changes her! It's hard being a loving mother."

"I'd suck the socks off him in a minute."

"Queers are so better. I'd be so happy if you was a fag and had a nice beautician boyfriend."

"The world of heterosexual is a sick and boring life."

"I wouldn't suck your dick if I was suffocating and there was oxygen in your balls."

"We are upper-echelon cat burglars and don't you forget it, Mr. Butterfly."

"You should know, we view sex as a violation of the spirit, and we'd certainly never allow ourselves to be caught in one of those positions."

"Everything sucks here. I'm going to Detroit to find happiness in the auto industry."

"I couldn't possibly eat spaghetti, I'm not Italian."
"We don't normally eat any type of noodle, Dawn. I'll have a small portion, to be polite."
"I'll have an extraordinarily large glass of iced water."

"Why, I had never felt complete until I experienced an eyeliner rush."

"You're looking at crime personified, and don't you forget it! I framed Leslie Bacon! I called the heroin hot line on Abbie Hoffman! I bought the gun that Bremer used to shoot Wallace! I had an affair with Juan Corona! I blew Richard Speck! And I'm so fuckin' beautiful I can't stand it myself!"

"I'm your attorney, Dawn, not your press agent."

"I'm the most famous person you've ever seen! Look at me! Look at my legs! Look at 'em!"

Just a bit more than one or two.

John Waters is such a genius. This might be Divine's greatest performance. The scene where Dawn struts down Baltimore, on display and pseudo-modeling, is so great. Like a lot of this movie--eg. Edith Massey hating eggs--it takes aspects of Pink Flamingos, removes some of the subversive violence and nudity and filth (only some), and adds an even higher level of theatricality. I think I often come off as a Mink Stole fanboy when I write about John Waters (which, y'know, isn't unfair), but I love her so much in this movie. "Playing car accident" and the few minutes where she's just talking about Hari Krishna might be my favorite parts of the movie. & it works really well as a satire about class, fame, crime, American culture (with the new Criterion release, I've read a few takes from people I suspect are not Waters fans that are like "You can read a satire into this, but I think it's clearly just an excuse to film depravity!" which is weird to me because I think this movie is not at all subtle in its satirical intentions but whatever).

Now that I've seen all his feature films, Female Trouble's really interesting because it also kind of contains the germ of every John Waters movie after it. The trial scenes and just the general treatment of crime signal Serial Mom, the crime-based, gritty photography of the Dashers (a phenomenal pairing of David Lochary and Mary Vivian Pierce) reminds me of Pecker, and the increased awareness of the world outside Dawn, which finds her repulsive and forces her to pay for her actions (whereas she rode off into the sunset eating dog shit at the end of Pink Flamingos), feels like a proto-A Dirty Shame where Waters separates Baltimore into the freaks and the not-freaks. Basically, Female Trouble is a massive, ambitious movie with a huge scope of subject matter and this is art I would die for.