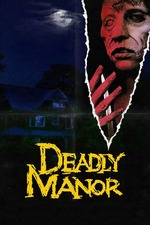 Deadly Manner, a José Ramón Larraz Slasher filmed in Upstate New York where a bunch of young adults crash in a massive mansion where everything in tow feels slightly off. Getting straight to the point - DM is a pretty average Slasher overall, and one with terrible cringeworthy dialog at that. Yet surprisingly I wasn't put off by those long stretches of nothing happening as there's an odd atmosphere ruminating about; Likely stemming from the European 'unreal' flair meeting the Upstate New York sensibilities and woods surrounding the mansion, being wholly a character in itself, like a majority of 1980's American Slashers. Or maybe it could also stem from the Larraz trademark of a naked woman endlessly gyrating and thrusting on a man, but the world may never know... Conclusively I almost gave this half a star more (6 out of 10, of course), however the ending comes out of nowhere and smacks you across the face with how terrible it is in specific motive. There's something interesting that happens to the killer that you really don't see happen in about 98% of Slashers, but I won't spoil it! Still, this doesn't make up for the ball being completely dropped and the killers random stupid reasons for attacking the innocent victims (even though a portion to that cause we've seen before).

Outside of a poorly rated Cop Comedy directed two years later, this would be Larraz's last genre outing. But suffice to say, he did provide us fans of the fantastique with a good number of memorable films in his career, and for that I'd like to thank him.