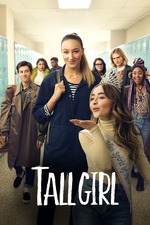 This was mostly very boring with a few funny moments (the big sister ducking so she doesn’t have to hug that girl? A masterpiece. And when the milk crate thing happened I laughed so much I had to give this a full star)

When Stig appeared and said his first sentence all I wanted to know was whether the guy playing him is actually Swedish bc wtf is that accent and I ended up on his insta where he very seriously stares into the camera and I thought it was a joke video at first but it was about his dad having cancer!!! So I feel bad for hating him so much in this

Anyway I was a tall girl for a while in school but then everyone started growing and I was just... average girl

AND ALSO at one point a character says a line in German and it literally did not make sense, I had to check the subtitles to see what they meant and that stuff infuriates me ok bye

Between Two Ferns: The Movie