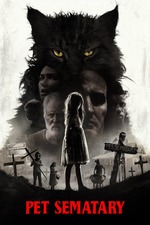 While I recognize that the ’89 film isn't necessarily good, I was young enough when I first watched it that it made an impression on me which made me interested in this remake and all it did was make me want to go back and watch that first version instead.

All of the actors here are giving this script a lot more oomph than it deserves, especially Amy Seimetz who plays Rachel Creed. I honestly wish one of the changes made was that the movie was from her perspective. Jason Clarke does the best he can in this but Louis Creed is just a dull character and since we are mostly following him, it makes for a pretty dull experience most of the time.

I did like the final act though! A lot actually.

I just wish the stuff preceding it was as good.

I guess dead really is better.