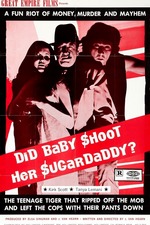 Really awful film about a Mafia guy who is killed. A detective begins to investigate because there's a missing suitcase with a million dollars in it. He goes to visit the dead man's widow and soon is seduced by her as well as her daughter, Baby.

You know, the greatest thing writer-director Jean Van Hearn did with this picture was give it a wonderful title. After all, back in the days when exploitation theaters and drive-ins were in demand, a great title is all you needed to get people to watch your movie. I had never heard of this thing until Vinegar Syndrome put it up on their Amazon channel and naturally this title jumped out at me. Sadly, the title is the only good thing about this sucker.

I'm really not sure what the director was trying to do with this picture. It's basically a crime-drama with some sexploitation thrown in. For some reason you've got the sexy mommy and daughter seducing men yet their clothes constantly stay on. For a sexploitation picture none of the nudity even happens until after the hour mark and by this time most people would have already turned the film off.

The performances, as you'd expect, are horrible but there are some pretty funny moments that come from it. The direction isn't much better and the story itself is just downright stupid as every single scene just keeps going on and on as if no one knew how to construct a real story. DID BABY SHOOT HER SUGARDADDY? is a pretty worthless film outside the title.