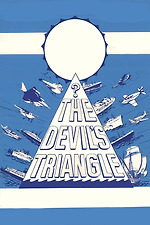 Vincent Price narrates this documentary that takes a look at several mysterious disappearances that happened in what's known as The Bermuda Triangle. The documentary has interviews with people who are experts on some of the disappearances including a few members of a search party who went out looking for five missing planes.

If you're a fan of mysteries then you'll probably want to watch this at least once but there's no question that it's a product of its time and has been replaced with many, many better documentaries on the subject. The stories told here are all rather interesting but at the same time they're told rather blandly so they never really build up any tension or scares.

THE DEVIL'S TRIANGLE does feature some nice narration by Price so fans of his will also probably want to check this out but for the most part this has been forgotten for good reasons.