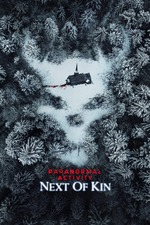 I'm probably one of those very few people who continue to have a soft spot for this franchise. Don't know about the others, but for me Paranormal Activity will forever have a special place in my heart. Cause, it is precisely what introduced me to this rather deserted realm of Found Footage and now being an admirer of the same, I couldn't feel more indebted.

Unlike many of their previous iterations, Next of Kin comes alongside a more contemporary approach. Drones, GoPros, Mirrorless Cameras; the advancement of the technology itself has certainly upped their game, at least on a technical level.

The same goes for the Audio, which is immaculately mastered with neat sound designing and a nearly flawless combination of Spaciousness & Clarity. Some of the credit must go to the Location too, as it was eerily beautiful and dreadfully empty, all at the same time.

Talking of Scares, they are served alright. They often make you feel disgusted, uneasy and most importantly puts you in an isolated space. Characters are surprisingly not as upsetting or idiotic as other films in this genre tend to deliver. Regardless, I'm still not fully convinced about their functionality, as we've still got a lot of blank spaces (In terms of Backstories) to fill.

Story and Screenplay wise; I wish there was a bit more elaboration. A lot of the aspects have gone unnoticed or purposefully avoided. The pace is another factor, that seems to have struggled quite a bit, particularly in the mid parts.

Luckily, the third act more than makes up for it. Possibly the most intense, and the weirdest segment in the whole film. And by the looks of it; more likely than not, there is a sequel in the offing. As the story has yet to come to a feasible conclusion.

This is My 300th Review on Letterboxd and that too comes on the eve of Halloween 🎃. As a Horror fan myself, I couldn't be happier!