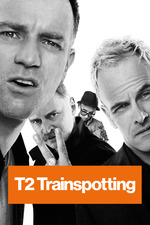 "First there's an opportunity, then there's a betrayal....."

I really enjoyed the original Trainspotting film. It had a killer soundtrack, an intriguing plot and great chemistry between the four leads. The new trend in Hollywood nowadays is to make sequels to films that are hitting their 20 and 30 year anniversaries, mostly for the nostalgia element. Boyle and crew have talked about this film for years and now that it's finally here I can tell you that it's well worth the wait. T2 Trainspotting is a Fantastic film with heart, another memorable soundtrack and the satisfaction of seeing Rent-boy, Begbie,Spud and Sick Boy on screen again.

It's been 20 years since the infamous heist where Mark Renton stole £16,000 after a heroin deal. 20 unfulfilling years later and he comes back home to Scotland. The film follows Renton making amends with his former gang, reminiscing about the past and choosing life as they go along. The film handles nostalgia really well. The film is intercut with scenes from the original film, which helps get the point across to viewers. It also is used to show where the characters were back in the original film and compares it to where they are now. Most of these characters haven't changed. Spud is still an addict, Sick Boy still will do anything for a buck and Begbie still has a bad temper. The only one that has really changed is Renton. Now he's clean, has his life straight....but something's missing. Hence why he returns to Scottland. These characters all have baggage with them. They all feel like they wasted it all, wondering where it all went. At times in the film they transform into their younger selves, embarking on endeavors that nobody in their mid 40's would. It leads to some heartfelt moments, with satisfaction being felt knowing that the gang is back together. One thing that hasn't changed is the chemistry between these characters. They make it feel like 20 years hasn't passed, and that they're just picking up back where they left off. If there's one character that shined in this film it was Spud. I enjoyed him in the original film, with his quirky attitude and mannerisms never failing to be entertaining. In this film, he's given more of an emotional story. He's kind of the tragic hero in a way, with this film showing him coming out of addiction. I don't want to spoil too much, but Supd is incredible In this film. If I had to sum up this film in one word it would be homecoming. Everyone is coming together after some time apart, and it feels so satisfying seeing them together. I felt that this film made a belated sequel right. It has more of what you loved about the first film and still has the same amount of heart.

The four leads, Ewan McGregor, Ewan Bremner, Robert Carlyle and Johnny Lee Miller are incredible in this film. They're portraying their original roles with the same mannerisms and their chemistry is oh so satisfying. It seems like they all care for each other, except for maybe Begbie, and it's nice to see them all together. Even Kelly Macdonald shows up for a bit, reuniting and catching up with Renton. One performance that surprised me was Anjela Nedyalkova as Veronika. She's Simon's girlfriend and becomes a friend of Spuds. She does well in her performance and also has great chemistry with Miller and Bremner. She even has some more emotional and heartfelt scenes with Bremner, which adds to this films heart.

You can't talk about this film without mentioning it's soundtrack. The original had a killer soundtrack, filled with songs that fit the mood and conveyed the intensity of an addicts life. While the first films soundtrack is slightly better, this films soundtrack is still great. It gives us songs such as Radio GaGa, Silk and Relax, all of which fit the film perfectly. Some songs like Relax are there to convey a more intense feeling, while songs like Silk have more of an impactful meaning. Either way, they compliment the film well with no song sounding out of place.

Overall, I think that T2 Trainspotting is just as good, if not slightly a bit better than the original. It's got the heart, the music and seeing closure to these characters stories was so satisfying. The film asks you, what the fuck have you been up to for 20 years. It makes you think about all of the missed opportunities and what you could've done. T2 Trainspotting is my favorite film of the year thus far, and I can't wait to watch it again.