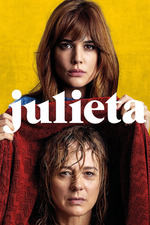 As Antía dries Julieta's hair, hiding her face as she has been drowned in sorrow, we see a new Julieta finding herself in the angst.

Julieta is about relationships and death. Part of our lives that happen eventually. As Julieta looks into her past looking for thread that would have made her daughter Anita move away, we see how much hidden everything was. Not just about Julieta but everyone who was part of it.

I never really thought when I started the movie that I would be in love and depressed at the same time. It wore me down as I was eating my Chocolate Chip Ice cream.

Even when I look at Julieta and how she handled everything in her life you can assume that at parts regarding her relationship with her father was a little hypocrite from her part. Julieta was strong but vulnerable at most of the time. She was in guilt about that persons death.

When the scene comes where Julieta meets Bea at the court and reveals what happened between her and Antia, the surprise face of her not knowing what was happening in her daughters life all this time and why she left. Yes, Julieta was depressed and had to be taken care for but even after she never really had conversations with Antia.

There are layers to each character. No character is showing their true self. It is there out in the open and it is also the best place place to hide.

Written and Directed by Pedro Almodóvar, he portrays every woman in this film with delicacy. He shows a passion that had Julieta driven for a while, love and death that she faced over time. Depression and sorrow. He showed how everything was missing from her life, how everyone was in shadows on themselves.

Emma Suárez and Adriana Ugarte as Julieta Arcos play the character to perfection. Their performances captured the emotional depth and guilt which strained on the Julieta.

Also, at times you might want to scream at Julieta saying 'Julieta, they are lesbians' tbh. Even Julieta and Ava had the undertones of making a relationship but Pedro just kept it into freindzone.

Julieta is something beautiful, truthful and delicately crafted story. It holds onto its brilliant performances, the passion, love, depression, sadness and guilt. As this was my first from the great filmmaker I can't wait to watch rest of his filmography.,