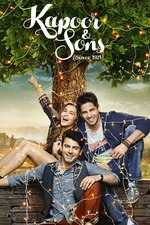 “All happy families are alike, each unhappy family is unhappy in its own way”

Family is one thing that we have since our day of birth and many a times they stick around our death.

Kapoor and Sons tells us a story about two brothers who return to their home after five years knowing their grandfather just had a heart attack.

From the start of the movie we get the sense that, there are so many things untold between them. Even when the brothers meet at the airport, at first they awkwardly try to shake hands. Their parents are having the typical marriage fight.

The character introduction itself starts with a chain reaction of fights. Everybody yelling at each other.

Rahul is a successful novelist living in London. He is the perfect boy for their parents, who can do no wrong, even if he did every blame tends to go towards Arjun who is most of his under appreciated than his brother. There is a scene where Rahul had smashed his fathers car and when the dad sees the car smashed he starts to yell at Arjun without even asking who smashed it, when Rahul confesses that he has smashed the car, father just looks at him and goes back into the house telling Arjun to go get it repaired in the garage.

For most of my life, I have been both the prized child and the blamed child. So I can understand what these both brothers are feeling.

The stories core is about Grandfather wanting a family photo before he dies...

A family should a safe space to us to talk about our feelings and secrets. But instead we are different person when we are with our family, we hid so many things from them that, sometimes we are like an Alien to them. We hide in our own space.

Kapoor and Sons comes strong in its screenplay. And it is something that is so different from Dharma Productions Film. Shakun Batra and Ayesha Devitre Dhillon have perfectly created a story about an imperfect and unhappy family.

When a script is this good, you need a cast who can deliver it... And yes the incredible cast delivered it... For me the stand out was Fawad Khan as Rahul. He delivers the perfect son and in the emotional scene he just conquers all over.... Ratna Pathak Shah as Sunita Kapoor and Rajat Kapoor as Harsh Kapoor lead lead the torch while Rishi Kapoor as the Grandfather add the humor to the film. Alia Bhatt perfectly plays the Girl next door who in herself is broken. Only performance which was not to the level of others was Sidharth Malhotra. I don't mean he was bad, but he kind of fell short with his performance with this incredible cast.