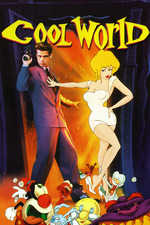 I take a certain degree of pride in being a contrarian in the face of public opinion, however even I can't defend Cool World, which is as big an ambitious failure as its reputation implies. So much so that it appears to have killed any interest Ralph Bakshi had in directing since he's done bupkis since.

The idea of taking the animation techniques developed for Who Framed Roger Rabbit? and apply that to a Ralph Bakshi universe would always have been a risky endeavour. His typically downtrodden worlds don't hold the universal appeal that Disney and Looney Tunes hold. Even for those who like his style of dark humor may find Cool World a muddled, unfinished affair. Some of the animation really pops, and all the rest feels like a first draft they didn't have the time or money to refine. I can just imagine how pressured and overworked Ralph must have been simply to get this out the door as a semi-cohesive product. He certainly didn't surpass the work Richard Williams did with Roger Rabbit; he didn't even come close.

Also, I still don't understand what the point of Brad Pitt's character was. The story actually centers around Gabriel Byrne as the tortured artist behind the actual 'Cool World' with an underdeveloped criminal backstory, yet all the marketing focuses on Pitt who is at best a side-character who just-so happens to be played by the biggest name in the movie. He has a shoe-horned appearance in the prologue to over-explain the relation between toon world and reality that felt like could have very easily been told from the perspective of the cartoonist desiring to escape reality.

It quite loudly screams "STUDIO INTERFERENCE" to me.

The only time Cool World ever actually clicked was at the very, very end when it briefly dropped the pretense of mixing live-action film with cartoon cels and commits purely to animated buffoonery. It leads me to believe this would have been a significantly stronger product had it stuck to two-dimensions instead of crumbling under the weight of three.