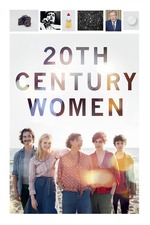 the intersection where Wes Anderson, Noah Baumbach, Greta Gerwig, and Mike Mills meet is a warmly sad place to be. or, maybe it's a vale, drenched in sun-lit dew, nonetheless a depression in the earth, a dip in the soil, something close to the ground but beating, breathing, humming.

i've never read Anna Karenina, but i know Tolstoy's "happy families are all alike; every unhappy family is unhappy in its own way" referentially. i've read things that have mentioned it. i've seen movies that have quoted it. i've heard it here, and there, and i've said it to other people without knowing the source material myself. this movie made me think of that: not just of the original quote, not just about the uniqueness of unhappiness, but of all the things that have found their own significance in such a sentiment as that.

that network of resonance with a central object -- or, in this case, quotation -- seems integral to 20th Century Women, which is not just a film about unhappiness. i think really it touches upon the varied responses to limited understanding in conjecture with an insatiable drive to be understood or to understand. i felt it most poignantly when Dorothea was the only one to be moved by Jimmy Carter's speech. everyone watched the same thing, heard the same words -- but no one felt the same thing, or at least, not in an equivocal way. and then again, when Abbie wants menstruation to be no big deal, but Dorothea is mortified by it, or she's mortified by what it means for her son to be subsumed into a world from which she is disconnected. and then again once more when Jamie says he wants Julie, and he means it, but she knows he means his version of Julie, which isn't who she is, even if it's a part of her. this film approximates that the closer we think we come to knowing someone, really, the further away from any essence of truth we go. maybe it's a futile attempt to understand. maybe it's wasteful thinking to want to be understood.

which is, i think, to say this: maybe this film isn't an answer to understanding or not. it does, instead, ask us to listen.

because the characters tell each others' lives, just as much as they inform them. their histories belong to one another because they cross paths, they are intersected, they intertwined. whatever tangled mess they make, however permanent or brief, happens. and that happening matters because there are witnesses to it. the things that otherwise would be insignificant -- songs we love, photographs we'll forget, vandalized cars, bruises from fights that will eventually fade -- matter because we see them, we hear them, we love them, we fear them, and we ultimately lose them.

the way Jamie is seen by everyone is different, and maybe none of it amounts to who he Really Is, but the same can be said for William and Abbie and Julie and Dorothea. they witness each other, and they love each other, and that is their story, that is the narrative, that is the film. and how precious that all is, to not have to walk any valley of unknowing alone, even if there is nothing beyond our short line of sight.