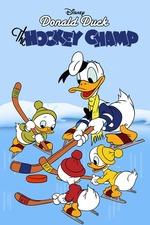 A perfectly fine, if unremarkable animated short from the '30s, featuring Donald Duck and his nephews playing some hockey down by the pond. Donald shows off some of his formidable hockey skills (who knew Donald Duck was a hockey champ?), only to find himself truly tested when his nephews start playing the game a little less traditionally.

Featuring quality animation for the era (particularly one scene involving the rapid-freezing of some water spilling over a waterfall), The Hockey Champ is a mildly-funny, decent-enough classic Disney short, albeit one that feels like it will be mostly forgettable.