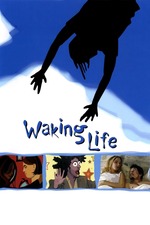 Richard Linklater's Waking Life is an intelligent, philosophical film experience unlike any other. As the film follows its unnamed protagonist through a series of dreamscapes, engaging in numerous short conversations about dreams, reality, and existential questions about life and purpose, it is impossible not to put yourself into the protagonist's shoes and take many of these deep conversations to heart.

Like dreams themselves, Linklater's film is structured in hazy, shifting vignettes, some lasting only a few seconds, while others go on for considerably longer. One moment, a philosophy professor is lecturing on the nature of existentialism ("Existentialism is often discussed as if it's a philosophy of despair, but I think the truth is just the opposite"), while in the next moment, a dissatisfied man is lighting himself on fire, or a woman is talking in a stairwell about not wanting to be an ant. Each episode is only loosely and thematically connected to the next, but when we pull back and take it all in, a semblance of an overarching plot and message begins to emerge.

Waking Life is one of the more thought-provoking films you will ever see. Honestly, the dialogue of the film and the questions it raises on the nature of dreams and reality would be effective and thoughtful, even if simply spoken over a plain, blank screen. College courses could be taught on the philosophies expressed in each segment, they are so rich. It's almost unfair, then, when the beautiful, shifting rotoscoped animation is added into the mix, and we are left with something truly inspirational and beautiful.